On Fleam Dyke, following the partial lifting of lockdown in Week 7, transect walks were completed for every week of the season, except Week 25. On the Roman Road, all 26 weeks were completed.

Looking at the data for individual species, it was a season of mixed results but unfortunately, on Fleam Dyke, in the absence of sufficient data, the Transect Walker software was unable to calculate indices for four species, namely the Brimstone, Orange-tip, Green Hairstreak and Common Blue.  Data on species which occur later in the season were not affected.*

The first of our three habitat specialist species, the Chalkhill Blue, had an excellent year on Fleam Dyke, with an increase of over 30% compared with 2019.  Only 2015 gave a better result.  On the Roman Road, the very small population of this species continues to hang on, with the same very low number that we recorded in 2019.

The second habitat specialist species, the Green Hairstreak, was present in two counts on Fleam Dyke but in the absence of other counts at the critical time of year, it was not possible to produce an index.  A single sighting on the Roman Road was the first in a transect count since we started monitoring.

It was a mixed year for the vanessids.  Red Admiral numbers were similar to 2019 on Fleam Dyke but there was a significant reduction on the Roman Road with just 4 sightings during the whole season.  After a poor season in 2019, the Small Tortoiseshell showed improvements on both sites, with very good numbers in the summer brood.  Peacock numbers were slightly higher than in 2019 on both sites.  On Fleam Dyke, only one Comma was recorded this year but on the Roman Road the number increased from 5 to 11.  2019 was a good year for the Painted Lady, a migrant species, but this year, there was only one sighting on each site.

The Marbled White was again one of the highlights of the year.  On the Roman Road the index increased from 65 to 84 but on Fleam Dyke it fell from 68 to 42.  However, even this number is better than those obtained in any previous year.  Hopefully, this confirms that this species is becoming established on our two sites, after many years of zero or very low numbers in the transect counts.  The Speckled Wood had a generally poor season and the number we recorded on the Roman Road was the lowest in 14 years of monitoring.  The number of Gatekeepers was similar to 2019 on the Roman Road but showed a considerable reduction of on Fleam Dyke.  The Meadow Brown was down in numbers on both sites. Although numbers were still above average on the Roman Road, it was the worst season so far for this species on Fleam Dyke with a reduction of 76% compared with 2019. The Ringlet also had another poor year on both sites with the lowest numbers so far recorded.  On the other hand, the Small Heath had a particularly good season with the best results so far on both sites, although numbers have always been lower on the Roman Road than on Fleam Dyke.

It is still difficult to judge the impact of the extensive scrub clearance in sections 1-4 on Fleam Dyke. The Green Hairstreak was the species we were most concerned about but fortunately total numbers don’t seem to have been affected, although they are now found in different parts of the site.  The reduction in numbers of some of the browns or satyrids may be linked to the clearance but a closer study of the data will be required.  Weather conditions may also have played an important part.

* The index is a measure of abundance, which is calculated for each species.  It is the total number of butterflies recorded in the transect counts, adjusted, where necessary, using estimated numbers for any missing counts or where weather conditions were not within the guidelines.  Where several weeks have been missed, as on Fleam Dyke in the early part of this season, and this coincides with the peak season for a particular species, it is not always possible to calculate an index. 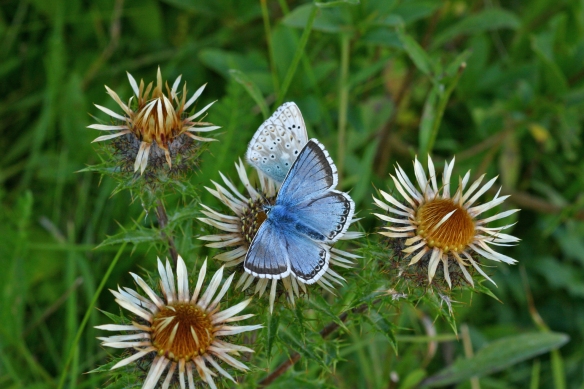